Abstract
Wiskott-Aldrich syndrome (WAS) is characterized by eczema, recurrent infections and microthrombocytopenia, with the latter being the most consistent finding in the course of the disease. The present case report describes a pediatric patient with WAS and severe bleeding phenotype resulting from a very low platelet count. In order to limit platelet transfusions and related risk of allo-immunization, use of recombinant activated factor VII (rFVIIa) for treatment of bleeding was decided. In addition, prophylactic treatment with eltrombopag was attempted, in order to increase platelet count and limit bleeding episodes. Management of the patient with the above mentioned agents led to a significant improvement in his clinical course and overall quality of life. This is the first report on off-label use of rFVIIa in a WAS patient. With regards to the off-label use of thrombopoietic agents in pediatric WAS patients, limited data is available and is reviewed in the report.
Keywords: Wiskott-Aldrich syndrome, Thrombocytopenia, Thrombopoietin receptor agonists, Eltrombopag, Recombinant activated factor VII

Wiskott-Aldrich syndrome (WAS) is an X-linked disease, representing approximately 3% of all primary immunodeficiency disorders [1]. The classical form of WAS is characterized by the triad of eczema, recurrent infections and microthrombocytopenia, although clinical phenotype and severity vary widely [2]. According to a 5-point severity score, severity of infections and coexistence of eczema, autoimmune disorder and malignancy differentiate patients with milder presentation from those with severe phenotype [3].

Prophylactic measures applied to improve life expectancy include pharmaceutical agents, such as intravenous immune globulin (IVIg) and antibiotics, as well as mechanical modalities, such as helmet wearing and strictly monitored physical activity. The only curative treatment, currently, is hematopoietic stem cell transplantation (HSCT).

The responsible gene is located in the short arm of X chromosome (Xp11.22–p11.23). It contains 12 exons and encodes a sequence of 502 amino acids residues, the WAS protein (WASp). Approximately 300 different gene mutations have been linked to the disorder. Disease severity may vary considerably, even within members of the same family -possibly, due to contributing environmental factors and disease-modifying genetic polymorphisms [1].

The most consistent finding in the course of the disease is thrombocytopenia, leading to bleeding episodes of varying severity. The majority of bleeding episodes is non-life-threatening, affecting mainly the skin. Mucosal bleeding, such as epistaxis and gum bleeding, can also occur, while severe bleeding episodes, such as gastrointestinal and intracranial hemorrhage, may prove fatal in up to 10% of patients [4].

As for treatment of bleeding episodes, supportive mea-sures, antifibrinolytics and platelet transfusions have traditionally been applied. More recently, thrombopoietic receptor agonists (TPO-RAs) have been used in WAS patients in order to increase platelet number and prevent bleeding [5,6].

We herein report on a pediatric WAS patient with a severe bleeding phenotype effectively managed with the use of eltrombopag and recombinant activated factor FVII (rFVIIa), and present a review of the supportive literature.

A four-year old boy, diagnosed with WAS during infancy, was referred for follow up. Relevant family history was negative but the c.397G>A (p.Glu133Lys) mutation was found during patient’s laboratory work up. Mild eczema was reported, with no severe infections complicating his course. He was on regular administration of IVIg as well as chemoprophylaxis with cotrimoxazole.

The reported bleeding phenotype was severe, including repeated episodes of epistaxis and gum bleeding, as well as frequent subcutaneous hematomas (Fig. 1). Before referral, the patient had received multiple platelet transfusions in order to control bleeding episodes, and frequently presented with severe posthemorrhagic iron deficiency. 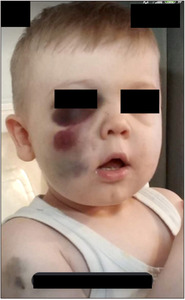 Figure 1. WAS patient presenting with subcutaneous hemorrhages (photo disclosed with the permission of patient’s family).

Following referral, initial complete blood count showed a white cell blood count of 8.8×103/mL, a hemoglobin level of 12.1 g/dL and a platelet count of 8×103/mL. Low platelet were thereafter consistently found to be below 10,000/mL. No platelet antibodies were detected, whereas IVIg administration had no impact on platelet count. Platelet function, as assessed by light transmission aggregometry, was found to be severely affected – although very low platelet counts could not permit a full assess-ment. Bleeding episodes were regular and often not easily controlled with tranexamic acid. According to the Pediatric Bleeding Questionnaire Scoring Key the patient’s bleeding score was 8 as he presented with epistaxis, oral cavity bleeding, and cutaneous and post-trauma muscle hematomas [7]. In order to limit further use of platelet transfusions, permission to administer rFVIIa was granted from the Greek Regulatory Authorities. In the course of the following 6 weeks, occurring new episodes of mucosal bleeding, severe epistaxis and gastrointestinal bleeding were effectively controlled with the use a sole rFVIIa infusion of 90 mg/kg, in an out-patient setting.

Given the consistently low platelet counts (<10,000/mL and in order to prevent further bleeding, a second permission was granted from the Regulatory Authorities, this time concerning the use of eltrombopag. Administered dose was gradually titrated to the maximum of 75 mg daily. A stable platelet count of over 20,000/mL was achieved after the first 4 weeks of treatment and bleeding episodes were dramatically reduced - both in number and severity – the patient’s score improving to 1 (Fig. 2). He remained on eltrombopag for 8 months until HSCT was performed, all the time tolerating the drug very well and presenting no adverse effects. 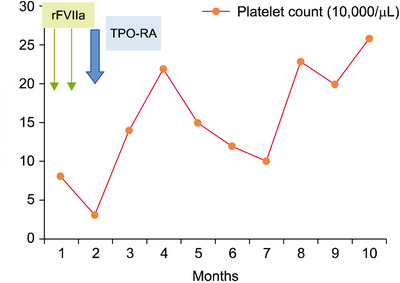 WAS is a multisystem disorder with heterogenous clinical presentation [3]. Bleeding diathesis of varying severity is a consistent finding, attributed to microthrom-bocytopenia [8,9]. The specific mechanism of thrombocytopenia remains unclear [10]. Platelets have shortened lifespan and are destructed by splenic macrophages [8]. They are, also, shown to have increased phosphatidylserine exposure upon minor stimulation, which leads to accelerated clearance [11]. However, this mechanism cannot solely be responsible, given that splenectomy may improve platelet count and size but does not achieve normal platelet values. Furthermore, thrombocytopenia relapse after splenectomy has been described [8]. There-fore, both defective platelet production and increased elimination seem to be implicated [10]. As for platelet function, findings have been inconsistent [4]. A recent study supports relatively decreased preactivation of platelets in the resting state, but without considerable functional differences compared to normal platelets in the activated state [11]. Reduced percentage of reticulated platelets, as well as of functionally defective megakaryocytes, even if they are normal in numbers, has also been described. In some patients, anti-platelet antibodies have been detected and have been associated with a worse outcome [2,3,8].

Treatment options for thrombocytopenia in WAS patients are limited. Supportive management includes care givers’ education regarding risk of hemorrhage and adoption of protective measures, such as the use of helmet [3]. Treatment of bleeding depends on the severity of the episode rather than platelet count. In case of mild bleeds, antifibrinolytics, such as tranexamic acid, may be helpful. In severe hemorrhages, platelet transfusions may be required. However, transfusions should be admini-stered with caution, because of the risk of anti-HLA antibody development, which could reduce the efficacy of future emergency platelet transfusions and, also, increase the risk of stem cell graft rejection.

In recent years, TPO-RAs have been used in WAS patients in order to prevent bleeding, demonstrating conflicting results [3]. Two such agents have been used in WAS patients: eltrombopag, an oral small molecule TPO-RA, and romiplostim, a recombinant fusion protein TPO-RA given as a subcutaneous injection. Both agents have been approved for the treatment of chronic immune thrombocytopenia in pediatric patients unrespon-sive to first line treatment. A large Russian study in 67 WAS pediatric patients showed complete or partial response in 60% of patients under romiplostim treatment [5]. Gerrits et al. reported use of eltrombopag in a small series of patients, with 5 out of 8 experiencing an increase in platelet count and one unresponsive patient successfully switching to romiplostim (Table 1) [4]. The above reports support inclusion of thrombopoietic agents in the available WAS treatment armamentarium, however, one should bear in mind that they are not universally effective and, of more importance, related long- term risks are not known [3,6,12].

Table 1 . Published Reports on TPO-RAs in WAS patients.

If preventive measures fail and bleeding occurs, a well-known hemostatic agent, rFVIIa, could be used in WAS patients. rFVIIa was approved as a bypassing agent for patients with acquired or congenital hemophilia and inhibitor presence, FVII deficiency and Glanzmann thromboasthenia. Activated factor VII plays a vital role in the coagulation process as initiator of hemostasis after binding to tissue factor at the site of injury, stimulating thrombin generation and stable fibrin clot formation.

rFVIIa has reportedly been used off label in many situations, showing efficacy in excessive hemorrhage control and reducing the need for platelet transfusions [13]. In specific, high doses of rFVIIa are able to increase thrombin formation in patients with thrombocytopenia, at even very low platelet counts (<5,000/mL) - increased thrombin formation induced by rFVIIa compensating for the low platelet counts [14].

In the present report a young WAS patient presenting with a severe bleeding phenotype is described. Disease related everyday restrictions, unavoidable repeated bleeds and frequent hospitalizations had a negative impact on the life of the patient, as well as of his family. In order to limit the need for platelet transfusions and possible alloimmunization, rFVIIa was used providing effective control of bleeds, while offering the additional advantage of treatment in an out-patient setting. To our knowledge, this is the first report on the use of rFVIIa in a patient with WAS. A single infusion was effective in each treated bleed, the chosen dose of 90 mg/kg being based on experience in pediatric patients with hemophilia and inhibitor presence. As opposed to hemophilia, thrombocytopenic patients present a normal intrinsic coagulation pathway, which may suggest that minimal amounts of rFVIIa could initiate hemostasis. Current literature reports on non-WAS pediatric patients being off label treated with rFVIIa mention successful hemostasis with administered doses varying between 30 to 200 mg/kg [15].

In the current report, in order to further improve the young patient’s quality of life, prevention of bleeds was attempted with the use of the TPO-RA eltrombopag. Although the absolute increase in platelet count was not significant, baseline values doubled, resulting in a significant improvement of the patient’s bleeding score. That in accordance to the report by Khoreva et al. who in a study of 67 WAS patients on romiplostim showed that patients demonstrated fewer bleeding episodes even on low platelet values [5].

In conclusion, off label use of rFVIIa and eltrombopag proved safe as well as effective in treating and preventing bleeding episodes in a young child with WAS. The two agents could be considered for use as a bridge to HSCT, minimizing the need for hospitalization, limiting the risk of alloimmunization and improving the quality of life for both patients and their families.