Abstract
Acute lymphoblastic leukemia (ALL) is the most common malignancy of children. Gastrointestinal complications can occur during treatment of these children due to disease infiltration in gut or treatment-related toxicity. Intestinal obstruction is one of these complications and this occurs mostly due to constipation and impacted stool. Intussusception is a very rare entity in children with ALL. Left sided colo-colic intussusception is even rarer. Most of the intussusceptions are ileo-colic and are associated with a lead point. We present a case of left sided colo-colic intussusception in an 8-year-old child with ALL. There was no lead point or leukemic infiltrate in the resected part of the intussusception. Our child had typhlitis leading to intussusception which is a very rare occurrence. Awareness regarding this complication with ALL is important for prompt diagnosis and treatment.
Keywords: Acute lymphoblastic leukemia, Colo-colic, Intussusception

Intussusception is a very common acute gastrointesti-nal emergency in children and accounts for one in four surgical emergencies. It is a condition in which a part of the intestine gets telescoped into an adjacent segment of the intestine, causing an obstruction [1]. If left untreated, it may lead to perforation and necrosis of the long segment. Most children developing intussusception are infants, usually between 5 and 10 months. It is scarce in older children, adolescents, and adults.

An eight-year-old girl who was investigated for recurrent fever for one month, on examination, was found to have pallor, generalized lymphadenopathy, and hepato-splenomegaly. Complete blood count showed pancytopenia with 67% blast. The flow cytometry report suggested blasts were positive for CD45, CD34, CD19, CD20 and no specific cytogenetic abnormality by polymerase chain reaction. The child was diagnosed to have precur-sor B-cell type ALL and was started on the induction phase of the BFM IC 2009 IA protocol. She received oral prednisolone for a week, followed by intravenous vincristine and daunorubicin on Day 8 of the induction schedule. On Day 12, she developed a high-grade fever, severe abdominal pain, and constipation. X-ray abdomen showed minimally dilated bowel loops with no intestinal obstruction features. Blood report showed pancytopenia (hemoglobin 6.4 g/dL, absolute neutrophil count 400 cells/mL, and platelet count of 40,000/mL), also procalcitonin 179 ng/mL with normal serum electrolytes and normal serum amylase. With a provisional diagnosis of typhlitis, the child was kept nil per orally and started on intravenous antibiotics with meropenem and vancomycin. The following day there was no improvement in her general condition, and she had distension of the abdomen with absent bowel sounds. X-ray abdomen showed extensively dilated bowel loops with air-fluid levels. USG and CT imaging of the abdomen was suggestive of an intussusception (Fig. 1). 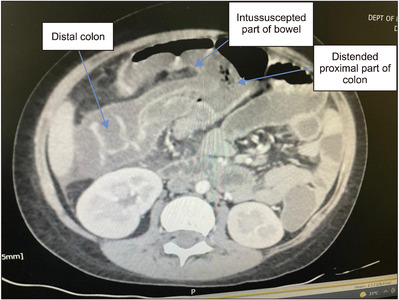 Since she had pancytopenia with poor general condition, also suspected perforation it was decided to go ahead with surgical management upfront rather than a non-invasive saline reduction; after explaining the high-risk nature of the intervention. Intraoperatively colocolic intussusception was found with bowel perforation and no other visceral disease or nodes (Fig. 2). Gradual reduction of intussusception revealed a serosal tear at the lead point with unhealthy bowel suggestive of gangrene. A limited colectomy and side-to-side anastomosis were done. The child was continued on antibiotics for ten days, and she recovered without any further complications. Histopathological sections showed an ulcerated colonic mucosa with ischaemic necrosis and numerous surface bacterial colonies amid the acute inflammatory infiltrate predominated by neutrophils. There was no evidence of any abnormal infiltrate or malignancy in the sections examined. She was restarted on the treatment for leukemia after two weeks and remained well throughout the induction. The child has completed intensive phase of chemotherapy and is on maintenance treatment, she is doing quite well. 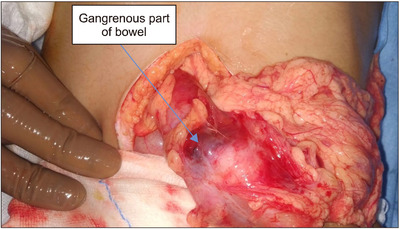 Intussusception is the most common cause of intestinal obstruction in children between the ages of 5 months to 3 years and the most common cause of abdominal emergency in less than two years of age. The mean incidence of intussusception is 74 cases per 100,000 among healthy infants younger than 12 months. However, there is a wide range depending on the country, with the highest incidence from South Korea and lowest from Bangladesh [4].

Most case reports of children developing intussus-ception during leukemia treatment are between 7 months to 3 years of age as it is the most familiar age group of the emergency [7-9]. The present case report described by us is in an older child, which is an unusual age for intussusception development. There are case reports described in literature on children more than seven years of age with ALL who have developed this complication during their treatment [10-12].

Our child developed this complication in the initial part of the induction phase of ALL treatment (BFM IC 2009 protocol). Other case reports also suggest the development of this complication in the induction period [2,3,7]. Studies have explained the cause of intussus-ception as probably related to vincristine, which causes an inflamed and thickened gastrointestinal tract [7]. Vincristine-mediated ileus progresses to an adynamic length of the bowel, and that fixed length of bowel becomes oedematous, septic leading to intussusception on itself [10].

The lead point in an idiopathic intussusception in normal children is usually hypertrophied mural lymphoid tissue (Peyer's patches) due to an adenovirus or rotavirus infection. Older children and adults typically have a specific lead point as against infants. Lead points of intussusception in children reported are Meckel's diverticulum, hemangioma, juvenile polyps, etc. It is well-documented that leukemic infiltrates in the intestine are present in up to 13-25% of children (found at autopsy) with ALL, which may also lead to intussusception [14]. In our child, the post-operative histopathological examination did not reveal any leukemic infiltrates but showed necrotic bowel with bacterial colonies suggesting an etiology of typhlitis. Necrotizing enterocolitis causing inflammation of the caecum and distal colon induces a caeco- colic intussusception. Our child had a colo- colic intussusception, a rare occurrence with typhlitis.

Though most idiopathic intussusception can be reduced with non-surgical management, a literature search on the modalities used for the treatment of intussus-ception with leukemia revealed that the majority of children with ALL required a surgical reduction after a failed contrast enema reduction. Some investigators have successfully managed children with ALL using non-invasive techniques like enema [11,12]. Nonoperative management is a desirable choice in ALL children as most children are malnourished, immunocompromised, and in many situations, pancytopenia. Immediate surgery is the modality of choice for unstable patients, children who have peritonitis, and those who develop bowel perforation during an attempted enema reduction. Clinical features that suggest sepsis-like elevated temperature and leucocytosis are relative indicators for surgery. Our child was managed with an open reduction and resection anastomosis.

If the intussusception is left untreated, the outcome is usually fatal. Ideally, it has to be reduced within the first 24 hours, and the prognosis is good. The mortality rate rises rapidly with increasing duration for diagnosis and treatment [1]. Feldman et al. reported a fatality case due to intussusception in a seven-year-old child with ALL because of delay in diagnosis [15]. Ultrasound is an excellent modality to diagnose intussusception. The prognosis in ALL children can be as good as normal children with an early diagnosis and prompt management.

A high index of suspicion, prompt radiological and surgical intervention is required to get a good outcome in children with leukemia who develop intussusception. Delay in diagnosis and intervention can be fatal for the patient.