Abstract
Infestation with Pediculus capitis, or head lice, is a common occurrence in the pediatric population. These ectoparasites survive by feeding on human blood. While a nuisance, lice are typically considered harmless and the amount of blood imbibed is not usually considered to be of clinical significance. We present a case of a 10- year-old female with severe, prolonged head lice infestation with concomitant iron deficiency anemia that was unable to be attributed to other causes.
Keywords: Anemia, Iron deficiency, Child, Pediculus, Lice infestation

Pediculosis capitis, or head lice, is a common complaint in the pediatric population that affects approximately 6 to 12 million children each year in the United States [1] and is usually managed by primary care phy-sicians. Treatment for head lice includes the use of topical pediculicides and in some cases oral pyrethroid along with non-pharmacologic environmental cleaning. However, management can be difficult due to increasing resistance to topical pediculicides and re-infestation with persisting lice in the patient’s environment. Despite the difficulty of management, infestation with head lice is considered a common nuisance of childhood that does not usually result in significant health consequences.

Lice feed on the blood supply of mammalian hosts. The quantity of the blood imbibed from each feed per louse was reported by a single study to be 0.0001579 mL [2]. The study assumed 3-4 feedings per day (although admittedly, the true number of feedings per day per louse is unknown). Using these parameters, it was found that in a severely infested patient (approximately 2,675 lice), a patient could lose 0.7 mL of blood per day, and even as much as 2.3 mL per day. However, several case reports have documented a correlation between lice infestation and iron deficiency anemia in both children [3-5] and adults [6-10], particularly in the setting of prolonged infestation. In each of these cases, despite extensive workup no other etiology for iron deficiency anemia could be found. Notably, in the pediatric cases, the iron deficiency anemia did not recur once the lice infestation had been cleared [3,4]. Here, we report a 10-year-old child with severe iron deficiency anemia in the setting of chronic, heavy lice infestation.

The patient is a 10-year-old female who presented to the Emergency Department after worsening fatigue and shortness of breath on exertion for the past month. She also had increased pallor and complaints of diffuse abdominal pain. She was described as a “picky eater”, however, her diet included iron rich foods such as red meat and pork. The patient had recent onset of menarche within the past 6 months. Her periods had been every 4 weeks and lasting 2 days. She uses 1-2 pads daily without any excessive bleeding. There were no reports of nosebleeds, melena, or hematochezia.

Her examination at the time of admission was notable for heavy lice infestation along hair shafts (Fig. 1) and she additionally had excoriated lesions located on her upper back and arms (Fig. 2). It was reported that she has had infestations off and on for the past 5 years. 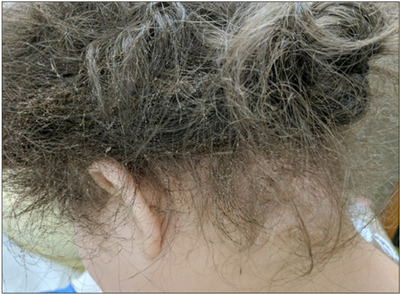 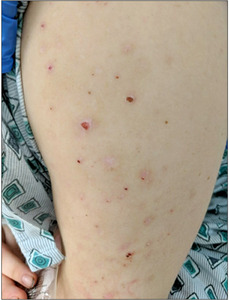 Etiology of the excoriations noted on the neck, back and upper arms were thought to be related to pediculosis corporis. The areas of skin excoriation were localized to areas of skin in contact with her clothing and no evidence of serpiginous burrows were noted which made scabies an unlikely diagnosis.

On admission her complete blood count demonstrated a hemoglobin level of 3.6 g/dL with MCV of 63.2 fL, iron of 14 mg/dL and ferritin of 2.3 ng/mL. Complete metabolic panel was unremarkable. Inflammatory markers were negative. Stool studies revealed negative lactoferrin assay, negative stool culture, negative shiga toxin, and negative stool ova and parasites. Celiac disease testing was also negative, as was fecal occult blood testing. Ab-dominal ultrasound revealed no focal lesions, masses, hemorrhages, or structural abnormalities. She responded well to blood transfusion which was continued until hemoglobin was approximately 7 g/dL. In addition, she was started on oral iron supplementation for treatment of iron deficiency. To treat the lice infestation, permethrin 1% lotion and shampoo for her head lice was used. The patient was discharged on day two of admission with improved symptoms and hemoglobin at discharge was 7.9 g/dL.

The patient followed up 13 days after discharge and at that time showed improvement in hemoglobin to 11.8 g/dL. Unfortunately, the patient still had lice infestation noted at that time. She had undergone retreatment approximately one week after initial diagnosis and the environment and other family members had been treated.

Our patient’s history, physical exam, and workup were not consistent with any common etiologies for iron deficiency anemia. Her menstrual history was not suggestive of heavy blood loss but could have contributed to the severity of anemia.

The patient did have severe and chronic pediculosis capitis infestation with concern for pediculosis corporis. Although a causal relationship has not been established in medical literature between lice infestation and anemia, a handful of cases have postulated a correlation in susceptible individuals [3-10]. Based on the calculations established by Speare et al. [2], the amount of blood imbibed by the average louse in an average burden of infestation is clinically insignificant. One milliliter of blood contains 0.5 mg of iron. Children age 6-11 years require 1.17 mg/day of iron to satisfy daily requirements. Heavy lice infestation (with an approximation of 2,000 lice) will remove approximately 0.7 mL of blood per day (0.35 mg of iron), but may even lose up to 2.3 mL (1.15 mg of iron) per day in severe infestation estimating 10 blood meals per day. Therefore, we assert that long term infestation of high burden, particularly in postmenarchal females, may lead to clinically significant anemia. This patient’s case, along with previous case reports mentioned, further corroborates symptomatic anemia due to iron deficiency in cases of severe infestation. Given that most patients with mild anemia are not symptomatic there may be several cases of iron deficiency that are undiagnosed. Iron deficiency may cause impaired immunity, psychomotor and cognitive delay especially in young children [11]. Given the increased incidence of lice infestation in the school aged population, there may be several children at risk. Iron deficiency may be a sequela to moderate to severe lice infestation and providers should consider screening for anemia in patients with considerable infestation, a relapsing – remitting course or multiple infestations over a short time span. Future studies are needed to determine the incidence of iron deficiency associated with severe lice infestation.