Abstract
von Willebrand disease (VWD) is the most common hereditary bleeding disorder. The treatment of VWD consists mainly of desmopressin and plasma-derived von Willebrand factor (pd-VWF) concentrate. We report on the first patient with VWD to be treated with recombinant VWF (rVWF) concentrate in Korea. Our patient was diagnosed with type 2 VWD at 10 months of age and suffered persistent severe epistaxis despite therapeutic levels of VWF activity and factor VIII (FVIII). At 34 months of age, rVWF was initiated and administered a total of 15 times in the following 8 months. No drug-related adverse events were observed and the patient was neither admitted nor given any transfusions during this period. Unlike pd-VWF/FVIII concentrates, rVWF did not increase FVIII to the excessively high levels that constitute a risk factor for throm-boembolism, and was also preferable to pd-VWF/FVIII concentrates in that it contains ultra-large multimers of VWF. This is the first reported case in Korea in which rVWF was used to treat VWD. rVWF may be well tolerated and effective in VWD patients, especially those with refractory bleeding.
Keywords: Recombinant von Willebrand factor concentrate, Plasma derived von Willebrand factor concentrate, von Willebrand disease

von Willebrand disease (VWD) is a hereditary bleeding disorder caused by deficiency or dysfunction of von Willebrand factor (VWF), which is the largest soluble multimeric plasma glycoprotein [1]. Until today, the most commonly adopted treatment methods to manage bleeding in VWD patients include human plasma-derived coagulation factor concentrates containing VWF and factor VIII (pd-VWF/FVIII), desmopressin that increases VWF and FVIII plasma concentrations by releasing endogenous VWF from endothelial cells, and adjuvant agents that promote local hemostasis and wound healing without altering plasma concentrations of VWF [2]. The modality of treatment depends on the type and severity of VWD, as well as the intensity of the hemorrhagic event [3].

Pd-VWF/FVIII concentrates have inherent limitations, since they lack larger molecular weight multimers normally found in plasma and vary considerably in VWF multimer composition and VWF:FVIII ratio even within the same product [2]. Recombinant VWF (rVWF) could change the treatment approach to VWD by avoiding the risks associated with plasma-derived products, while maintaining efficacy and consistency [3,4].

In this article, we report on the first patient with VWD to be treated with rVWF in Korea.

A 14-month-old girl with VWD visited the emergency department at our hospital for uncontrolled epistaxis. She suffered epistaxis for over 5 hours, even after administration of 50 IU/kg pd-VWF/FVIII concentrates. The patient was first diagnosed with VWD at another hospital at 10 months old, when an immunization resulted in severe bruising. Her test results at the time of diagnosis were as follows: FVIII, 45.9%; VWF antigen (Ag), 45.7%; von Willebrand factor ristocetin cofactor (VWF:RCo), 20.6%; and blood type A+.

The patient was admitted and given multiple doses of pd-VWF/FVIII concentrates and intravenous tranexamic acid, after which symptoms improved. At the outpatient clinic 1 month later, and without any additional pd-VWF/FVIII concentrates, her results were as follows: FVIII, 82.1%; VWF Ag, 44%; and VWF:RCo, <1%. In addition, VWF multimer analysis revealed a decrease in the high molecular weight forms of VWF multimers. This is suggestive of type 2B or 2A VWD.

In the following 20 months, the patient has visited our hospital for treatment of bleeding 39 times, all of which were epistaxes except for one case of gum bleeding. She was admitted four times and given repeated doses of pd-VWF/FVIII concentrates, as well as packed red blood cell transfusions. Although her blood tests after pd-VWF/FVIII concentrates administration showed VWF Ag from 74-200%, VWF:RCo from 49-99%, and FVIII>100%, the bleeding continued. Eventually, we decided to use a rVWF (vonicog alfa, 50 IU/kg) instead of pd-VWF/FVIII concen-trates. The patient was given rVWF for the first time at 34 months. She was observed for signs of any adverse reaction to rVWF. Thirty minutes after administration, VWF Ag rose to 151% and vWF:RCo to 80%. FVIII was mildly elevated to 38-45.7% during rVWF treatment, whereas it increased to over 100% after pd-FVIII/VWF administration (Fig. 1). Epistaxis was also well controlled. 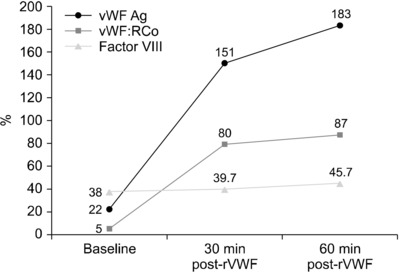 In the 8 months during which the patient was treated with rVWF, we performed mixing test after 5th and 14th administration to check if any neutralizing antibodies to rVWF had been formed, and concluded that they had not.

The patient was given rVWF a total of 15 times in an 8-month period, during which she was not admitted or given any transfusions. Bleeding was well-controlled with each administration of 1-2 doses.

This was the first reported case in Korea in which VWD was treated with rVWF. There were no thromboembolic events or any adverse reactions to the drug. Our case is noteworthy in that, prior to rVWF treatment, the patient had persistent epistaxis despite achieving therapeutic levels of VWF [5]. She had type 2B or 2A VWD, characterized by an absence or decreased levels of high-molecular-weight multimers (HMWMs) [3]. She continued to bleed even when treatment with pd-VWF/FVIII concentrates elevated VWF Ag, VWF:RCo activity, and FVIII levels. Analysis of the multimeric profile of VWF after rVWF may have been helpful, but could not be per-formed.

In general, treatment methods for VWD vary by its type and severity. Patients are treated with desmopressin or VWF-containing concentrates when acute hemorrhage or trauma occurs, or in order to prevent severe loss of blood during surgery [6,7].

Pd-VWF/FVIII concentrates, originally licensed to treat hemophilia A patients who lack FVIII, can also be used in VWD to address VWF and FVIII deficiencies that do not respond well to desmopressin [8]. Products licensed to treat VWD are generally labeled for their VWF and FVIII contents. These pd-VWF/FVIII concentrates vary in their VWF and FVIII concentrations, with the levels depending on the manufacturing process as well as the plasma used [5,8]. These products may raise safety concerns regarding post-transfusion transmission of bloodborne agents and neutralizing anti-VWF alloantibodies, but such issues are very rare now [8]. The more pressing concerns are that bleeding is sometimes poorly controlled despite adequate levels of VWF, and excessively high FVIII increases thrombotic risk [9]. In addition, the multimeric structure of VWF is abnormal in VWF/FVIII products, and to varying degrees, these products lack HMWMs [5,10]. This is because during plasma fractionation, HMWMs are cleaved by VWF protease ADAMTS13 (a disintegrin and metalloproteinase with a thrombospondin type 1 motif, member 13) [11].

VWF is a huge, structurally complex protein, and numerous hurdles had to be overcome to produce recombinant VWF on a large scale [8]. One distinct feature of rVWF, attributed to its production in the absence of ADAMTS13, is that it contains the ultra-large VWF multimers present in endothelial cells and platelets (but not plasma) [12,13], in addition to all of the VWF multimers normally present in plasma. Several studies of rVWF have demonstrated its efficacy and safety in patients with all types of VWD, leading to its licensing for therapeutic use. Vonicog alfa, the first rVWF, has been licensed for treatment of bleeding episodes and perioperative management of bleeding in the United States [14]. In Europe, it has been approved for the treatment of hemorrhage and surgical bleeding, as well as for prevention of surgical bleeding [15]. Two additional phase 3 studies exploring the use of vonicog alfa in pediatric patients (NCT02932618) and as a prophylactic agent for recurrent bleeding (NCT02973087) are ongoing [8].

Our patient, who had type 2B or 2A VWD, continued to bleed despite achieving high levels of VWF Ag, VWF:RCo activity and FVIII after treatment with pd-VWF/FVIII concentrates. All rVWF infusions were given due to bleeding episodes, not for prophylaxis against bleeding. While no adverse events were observed in our patient, known side effects of rVWF include dizziness, vertigo, tachycardia, nausea vomiting, etc. These may affect up to 1 in 10 patients [15].

We could not confirm whether anti-VWF neutralizing or binding antibodies were formed, but the mixing test and appropriate elevation of VWF level indicated no antibody formation.

In summary, we report a case of rVWF administration in pediatric VWD. rVWF was well-tolerated and controlled bleeding that could not be managed with pd-VWF/FVIII concentrates.

Vonicog alfa is currently unregistered in Korea and the product was supported by Takeda Pharmaceutical Com-pany through Early Access Program.