Synovial sarcoma occurring in the pleura and lung is rare [1,2]. Although diverse group of tumors involve the pleura, malignant mesothelioma has dominated the discussion relating to the diagnosis, etiology and management [3]. Primary pleural malignancy other than malignant mesothelioma are uncommon [3]. Here, we report a case of malignant pleuropulmonary synovial sarcoma developed 17 years after allogeneic stem cell transplan-tation. The patient was initially diagnosed as malignant mesothelioma, without any environmental or occupational asbestos exposure. Five months later, the patients presented with soft tissue metastasis that underwent needle biopsy. Pathological examination including RT-PCR revealed synovial sarcoma, which led to a review of the original tumor findings and confirmed the diagnosis of pleuropulmonary synovial sarcoma. To the best of our knowledge, our patient is the first case of pleuropulmonary synovial sarcoma developed as a second malignant neoplasm after allogeneic hematopoietic stem cell transplantation for pediatric leukemia with TBI condition-ing.

A 22-year-old man presented with progressively worsening chest discomfort when swallowing foods, exertional dyspnea, and a 6 kg-weight loss in our hospital on March 2019. He was born on October 1996, and had been diagnosed with acute myelomonocytic leukemia at 5 years of age. He received induction therapy comprising cytarabine, idarubicin, and etoposide, which resulted in complete remission. After consolidation chemotherapy, he underwent sibling-matched allogeneic bone marrow transplantation on June 2002. His conditioning regimen included total body irradiation (TBI, 12 Gy in 6 fractions) and cyclophosphamide. He was on regularly followed-up and did not present any specific medical problem. The patient lived in a city area with his father, a part-time tour guide. Neither father nor son had any known exposures to asbestos. Moreover, there was no family history of cancer. Without a regular job after graduating high school, the patient was mostly homebound.

Chest imaging revealed an 8 cm×5.2 cm mass in the right middle lobe, pleura, and diaphragm (Fig. 1). Histo-pathology revealed sarcomatoid malignant mesothelioma with positive immunohistochemical staining for calretinin and D2-40 (Fig. 2). Gene expression studies were not done. Moreover, the patient was not considered a candidate for surgical resection because of the extent of the tumor. Systemic chemotherapy was initiated using bevacizumab (15 mg/kg), pemetrexed (500 mg/m2), and cisplatin (75 mg/m2) every 3 weeks. After the first course of chemotherapy, chest pain and dyspnea improved. How-ever, chest CT obtained after the second course of chemotherapy showed increased tumor size (8.2 cm×6.3 cm). Treatment was switched to concurrent chemo radiotherapy (60 Gy in 30 fractions) with weekly carboplatin (to achieve an area under concentration/time curve of 2 mg/mL∙min) and paclitaxel (45 mg/m2), and then to cisplatin (70 mg/m2 on day 1) and gemcitabine (1,000 mg/m2 on days 1 and 8). Unfortunately, his tumor progressed and five months after the initial diagnosis, masses developed in his arm and flank. He underwent biopsy of the soft tissue. Unexpectedly, histopathology revealed synovial sarcoma, with positive RT-PCR implying presence of chimeric fusion transcript of SS18 (SYT) gene and SSX gene, resulted by t(X;18) pathognomonic finding of synovial sarcoma (Fig. 2C). Questions were raised about histopathologic discrepancy between the lung and soft tissue masses. Meticulous pathologic reviews of the lung and soft tissue mass were performed. The H&E morphologies of the lung and soft tissue were similar. However, RT-PCR of the lung was inconclusive due to the lack of sample quantity. Chemotherapy was switched to sarcoma-based regimen, consisting ifosfamide and doxorubicin, and then pazopanib. Despite multiple lines of chemotherapy, his tumor progressed. The patient and his family elected to discontinue therapy and returned home in October 2019. He received hospice care and died in February 2020. 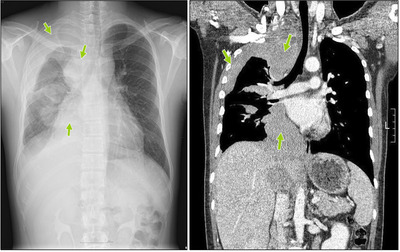 Figure 2. Histologic (A, B) and molecular findings of the lung and soft tissue of the arm (C). The biopsied tumor from the lung is composed of pleomorphic epithelioid cells with atypical mitoses and focal necrosis (A). Tumor cells stained positive for pan-cytokeratin and vimentin, focal positive for calretinin, therefore, initial diagnosis of malignant mesothelioma was made. Later, similarities of the histologic findings between the two sites (A, B) and positivity of the SYT/SSX RT-PCR of the arm (C, circled) confirmed the diagnosis of pleuropulmonary synovial sarcoma.

Pleuropulmonary synovial sarcoma is extremely rare, and 37 cases are reported in literature [4-6]. Synovial sarcoma most commonly occur at extremities, close to large joints [7]. Other sites have been reported, including abdominal wall, esophagus, duodenum, heart, kidney, retroperitoneum, lung and pleura [6,7]. These tumors arise from pluripotent mesenchymal cells with a capacity for differentiation into epithelial and/or spindle-shaped cells [1,8], while tumors of the extremities originate in synovial structures. Because of its clinical presentation at unusual site, misinterpretation of the histopathology of pleuropulmonary synovial sarcoma are frequent [6]. Dif-ferential diagnoses should include sarcomatoid carcinoma, pleuropulmonary blastoma, adenocarcinoma, fibro-sarcoma, hemangiopericytoma, and malignant mesothelioma [2,4]. Among the 36 cases reported, 3 patients were diagnosed as malignant mesothelioma [6]. The histopathology of the lung biopsy samples of our case showed some area with sarcomatoid feature and some area stained positive for calretinin. In retrograde, we presume that tissues stained positive for calretinin might be reactive mesothelial cells. Molecular tests are helpful in diagnoses of synovial sarcoma, as chromosomal translocation t(X;18)( or ) is found in over 90% of cases [9]. In our case, RT-PCR using the initial lung biopsy sample was inconclusive due to the small sample quantity. However, histological and immunohis-tochemical findings of the initial lung biopsy samples and soft tissues mass of the arm pointed to a definitive diagnosis of pleuropulmonary synovial sarcoma.

In conclusion, we report an extremely rare case of a pleuropulmonary synovial sarcoma developed after allogeneic hematopoietic stem cell transplantation with TBI-based conditioning for childhood leukemia. Diagnostic approach for a soft tissue tumor of the pleura should be made considering the clinical context, as well as morphologic features with appropriate molecular testing.