Abstract
X-linked inhibitor of apoptosis protein (XIAP) deficiency is a rare immunodeficiency disorder. A 13-month-old boy was diagnosed with pure red cell aplasia (PRCA) and treated with steroid and cyclosporine. Bone marrow showed diminished erythroid precursors, and positive results for Parvovirus B19 and Cytomegalovirus (CMV) infection. A genetic study of Diamond-Blackfan anemia was negative. Five months later, he was admitted due to fever and lymphadenopathy. PCR showed still positive for the Parvovirus, CMV, and Epstein-Barr virus (EBV). He was diagnosed with diffuse large B-cell lymphoma that was positive for EBV. The patient received chemotherapy with R-CHOP, and achieved complete remission. Immunoglobulin (Ig) levels were within an age-matched normal range until the completion of chemotherapy. Subsequently, he was admitted nine times due to recurrent pneumonia and acute otitis media between two and eight years old. We reanalyzed the Ig levels and lymphocyte subsets: IgG, IgA, and IgM were 30 mg/dL, below 1.0 mg/dL, and 36 mg/dL, respectively. Lymphocyte subsets showed nearly absent CD19 (+) cells, but T- and NK cell counts were within normal ranges. A genetic study showed a hemizygous inframe deletion mutation in exon 4 of the IAP gene without the SH2D1A mutation, consistent with a XIAP deficiency. Therefore, he was diagnosed with XIAP deficiency. Genetic analysis of his mother, aunt and elder sister showed that they were carriers of the same gene mutation. He receives intravenous Ig regularly with follow-up, and still requires a low dose steroid to maintain hemoglobin level. We report XIAP deficiency as initial presentation of PRCA.
Keywords: X linked inhibitor of apoptosis protein, Pure red cell aplasia, Epstein-Barr virus, Immunodeficiency

X-linked inhibitor of apoptosis protein () deficiency syndrome is a rare primary immunodeficiency with dysgammaglobulinemia [1,2]. Patients with show intractable inflammatory bowel disease (IBD) or extreme vulnerability to Epstein-Barr virus (EBV), which frequently developed hemophagocytic lymphohistiocytosis (HLH) [1]. , as a mutation is classified as a type 2 X-linked lymphoproliferative disease (XLP), while mutation is classified as a type 1 XLP [3]. XLP is an inherited primary immunodeficiency with an incidence of 1-2 per million males. The clinical triad manifestations of XLP show susceptibility to EBV with HLH, lymphoma, and dysgammaglobulinemia [3]. is classified as a type 2 XLP according to genetic mutations and some laboratory and clinical differences [3,4]. The gene is related to signaling by the nucleotide oligomerization domain receptor (NOD)-like pattern, which is an intracellular sensor of infection as an inflammasome, although the gene has an anti-apoptotic property [3-5].

Pure red cell aplasia (PRCA) has various etiologies, including congenital or acquired conditions such as a viral infection [6]. The acquired PRCA is related to an underlying disease or viral infection with parvovirus 19 [6]. EBV infection in the post-transplantation state or enzyme deficiency contributed to the development of the aplastic crisis [7,8]. Here, we report a case of deficiency as the initial presentation of PRCA.

An 8-year-old boy was admitted nine times because of recurrent pneumonia and acute otitis media since the age of 3 years. He was diagnosed with PRCA at 13 months of age, which was controlled by repeated transfusions and prednisolone with cyclosporine. At diagnosis, a bone marrow study showed the arrest of erythroid lineage maturation. A viral study showed positive parvovirus B19 and cytomegalovirus (CMV) by serology and RQ-PCR. We did not have any genetic results for Diamond-Blackfan anemia. Five months later, he was admitted because of remittent fever with enlarged cervical lymph nodes that had progressed for 2 weeks. His laboratory data showed hemoglobin 7.7 g/dL, platelet 100,000/μL, ferritin 788 ng/mL, fibrinogen 146 mg/dL, and triglyceride 199 mg/dL. PCR for virus showed persistent positivity of parvovirus B19 and CMV and was newly identified for EBV. We performed lymph node biopsy and PET-CT, the results of which were compatible with diffuse large B-cell lymphoma positive for EBV (Fig. 1). He received six courses of chemotherapy with rituximab, cyclophosphamide, doxorubicin, vincristine, and prednisolone. He achieved com-plete response, but still showed fluctuation of hemoglobin. Immunoglobulin levels were within the age-matched normal range until the completion of chemotherapy. 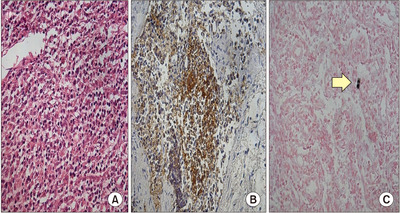 The patient was diagnosed with bronchopneumonia based on physical and radiologic findings. Viral studies were still positive for parvovirus B19, but negative for CMV and EBV. We evaluated immunoglobulin (Ig) level and lymphocyte subsets due to recurrent infection and rituximab-containing chemotherapy. The lymphocyte subset showed CD3 83.6%, CD4 18.8%, CD8 31.6%, CD19 0.4%, CD56 13.9%, and CD3+CD56+ 8.9%, while the Ig levels were IgG: 30 mg/dL (normal range: 870-1,700 mg/dL), IgA: below 1.0 mg/dL (normal range: 110-401 mg/dL), IgM: 36 mg/dL (normal range: 33-190 mg/dL), and IgE: below 1.0 IU/mL (normal range: <52 IU/mL). We performed a genetic study of immunodeficiency based on EBV-associated lymphoma and repeated infection. A genetic study showed a hemizygous in-frame deletion mutation of c.1045_1047delGAG, p.(Glu350del), consistent with deficiency (Fig. 2). A genetic study of family revealed his mother, aunt, and elder sister being carriers of the same gene mutation. He receives regular intravenous immunoglobulin due to dysgammaglobulinemia and low dose prednisolone to maintain his hemoglobin level. The patient did not experience infection after immunoglobulin replacement. Table 1 shows his clinical course with virus titer and immunoglobulin levels.

Table 1 . The change of immunoglobulin levels and real time PCR results of Epstein-Barr virus (EBV) and cytomegalovirus (CMV) according to clinical course including chemotherapy with rituximab, recurrent infections, and low dose prednisolone with regular intravenous immunoglobulin. 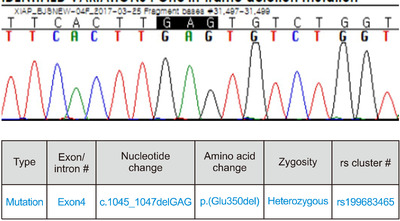 Here, we present a case of deficiency with PRCA as the initial manifestation. The patient received transfusions with steroid and cyclosporine. He developed EBV -associated lymphoma after 5 months of PRCA treatment later. The patient received chemotherapy with rituximab and achieved a complete response. The patient showed a normal range of Ig levels until completion of chemotherapy with rituximab, but Ig level decreased after each event of recurrent infection.

is composed of three baculovirus: the inhibitor of apoptosis domains, ubiquitin binding domain and C-terminal RING domain [3,5,9]. This protein has an anti-apoptotic activity which causes inhibition of programmed cell death and blocking of the activated state of caspase 3, 7, and 9 [5]. protein involves another signaling pathway or cellular response, including NFκB activation, MAPK pathway, TGF-β receptor signaling, and autophagy [5]. also plays a role in innate immunity and the negative regulation of inflammation as a negative regulator of pro-inflammatory cytokine production and intracellular inflammasome activation [5,10].

In this patient, the initial finding was PRCA with an identification of the parvovirus and CMV. These findings may lead to excessive apoptosis of virus-infected erythroid cell lineage and overproduction of inflammatory cytokines to bone marrow precursors [3,5,10]. However, we could not identify the underlying disease at that time, although Diamond-Blackfan disease was ruled out through genetic study.

The patient was developed EBV-associated diffuse large B-cell lymphoma and received chemotherapy with rituximab and achieved complete response without relapse until the diagnosis of deficiency. The clinical manifestations of deficiency include high susceptibility to EBV infection, associated HLH, intractable IBD such as Crohn’s disease, and without the development of lymphoma [4]. In type 1 XLP, EBV infection is associated with defects in the cytotoxicity of CD8+ T and NK cells [3,4,11]. In addition, the accumulation of apoptotic cells and persistence of EBV-infected cells could lead to abnormal inflammation and then progress to HLH [3,5,11]. EBV is a well-known oncogenic virus, that induced lymphoma via viral and molecular mechanisms in deficiency [11,12]. deficient patients are not developed to lymphoma in contrast to type 1 XLP [5]. In patients with deficiency, cellular defects might exaggerate T cell apoptosis following TCR-induced activation [11], and NKT cells showed low number with defective function to EBV [13]. This patient received cyclosporine and prednisolone for pure red cell aplasia. The long-term use of immunosuppressive agents might be contributed to develop EBV associated lymphoma associated with defective NKT cell function [14].

The Ig level was nearly within normal until the completion of chemotherapy with rituximab in this patient. After a complete response, he suffered from recurrent infections, including pneumonia and acute otitis media. Hypogammaglobulinemia with low B cells was also observed in the patient. This mechanism may develop due to EBV infection. He was diagnosed with EBV-associated lymphoma, and received rituximab, and experienced recurrent infections. In deficiency, EBV contributes to the accumulation of apoptotic cells, maintenance of EBV-infected B cells, but exacerbation of B-cell death, although NK and T cell cytotoxicity may be normal [3,5,11]. Rituximab eliminates EBV-infected B cells, but might strongly contribute to the loss of Ig production of Ig by B cells in this genetic background. Fortunately, the patient did not have gastrointestinal problems associated with IBD until now. In deficiency, IBD is generally severe due to the elevated level of pro-inflammatory cytokines caused by defects in the inflammasome pathway [1,5]. We will closely monitor the gastrointestinal mani-festations.

The optimal treatment for deficiency depends on the patient’s status. Patient with EBV-associated HLH might be treated using steroids with chemotherapy, rituximab, or alemtuzumab. Replacement of Ig may be supportive of dysgammaglobulinemia [1,3]. However, hematopoietic stem cell transplantation (HSCT) recommended for survival, which is related to a reduced intensity conditioning regimen and controlled HLH status [5,15].

Here, we present a case of deficiency as the initial clinical manifestation of PRCA. However, due to the patient’s symptoms, another genetic disorders in PRCA without congenital hematologic disease may be considered.