Abstract
Atypical chronic myeloid leukemia (aCML), BCR-ABL1-negative is a rare myeloid neoplasm, especially in pediatric patients. The mutations identified in aCML have overlapped with those of other myeloid neoplasms. In recent studies, ruxolitinib, a Janus kinase (JAK) inhibitor, was found efficient in some patients of aCML with CSF3R mutation. Here, we report a pediatric case of aCML with CSF3R mutation who did not respond to ruxoritinib, but was successfully rescued with hematopoietic stem cell transplantation (SCT). A stuporous 13-year-old boy was transferred with leukocytosis. Computed tomography showed an acute lobar intracranial hemorrhage in the left frontal lobe. The bone marrow aspirate demonstrated significant granulocytic proliferations with predominant dysplasia. Hydroxyurea and imatinib were initially administered to reduce leukocytosis. After BCR-ABL1 was found to be negative, imatinib was discontinued. After the identification of CSF3R mutation by customized targeted DNA sequencing (NGeneBio, Seoul, South Korea), ruxolitinib was added. He seemed to have hematologic and clinical responses on 2 months of ruxolitinib treatment, but the blast counts in the bone marrow increased. He underwent a full-matched unrelated peripheral blood SCT successfully 3 months after his diagnosis and has currently been disease-free 8 months since the transplantation. In conclusion, ruxolitinib for aCML with CSF3R mutation might not always induce a significant response but could be used as bridge to hematopoietic SCT.
Keywords: Atypical chronic myeloid leukemia, CSF3R mutation, Ruxolitinib, Children

Atypical chronic myeloid leukemia (aCML) is a rare -negative myelodysplastic syndrome/myelopro-liferative neoplasm (MDS/MPN). It is a disease of the elderly as the median age at diagnosis is in the sixth and seventh decades of life [1]. The incidence was estimated to be 1-2% of -positive CML cases in adults, but rarer in children [2].

Currently, the diagnosis of aCML is based on morphology because its clinical and molecular features overlap with those of other myeloid neoplasms, such as chronic myelomonocytic leukemia, chronic neutrophilic leukemia (CNL), and unclassifiable MDS/MPN [1,3]. The main features of aCML are the principal involvement of neutrophil lineage (≥10% of the leukocyte) with leukocytosis (>13,000/μL). According to the World Health Organiza-tion, 2016 diagnostic criteria, prominent granulocytic dysplasia, <20% blasts in the peripheral blood (PB) and bone marrow (BM), and minimal absolute basophils (<2% of leukocytes) and monocytes (<10% of leukocytes) should be entertained [4]. In addition, to rule out Philadelphia-positive CML and other myeloid-lymphoid neoplasms associated with eosinophilia, , , , and rearrangements or PCM-Janus kinase (JAK)2 fusion must be excluded [4].

In contrast to , which defines CML, no single genetic lesion characterizes aCML. The mutations identified in aCML are commonly found in other myeloid neoplasm cases [1,3,5,6]. The most commonly affected genes (>20%) in aCML are , , , , and , and less frequently (<10%) , , , , [1,3,6]. Additionally, aCML has been reported to harbor mutations [1,3]. Among them, mutation can activate JAK/STAT signaling [3,5]. In recent studies, ruxolitinib, a JAK inhibitor, was found to be efficient in some patients with aCML with mutation [5,7,8].

Here, we report a pediatric case of aCML with mutation who did not respond to ruxolitinib, but was successfully rescued by hematopoietic stem cell transplantation (HSCT).

Brain computed tomography (CT) showed an acute lobar intracranial hemorrhage (ICH) in the left frontal lobe with the midline shifting to the right (Fig. 1A). After platelet transfusions, evacuation of the hematoma was attempted. 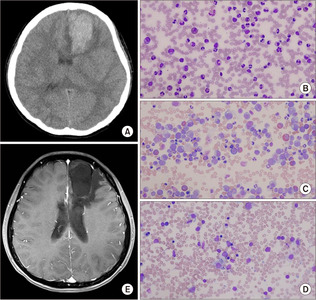 A PB smear showed left-shifted myeloid hyperplasia with dysplasia, blasts of 2%, increased granulocytic precursors (myelocytes of 20% and metamyelocytes of 3%), and an absence of both basophilia and monocytosis (Fig. 1B). A BM aspiration revealed increased granulocytic series with 8.7% blasts (Fig. 1C). The blasts cells expressed CD13, CD33, CD34, CD56, CD117, and myeloperoxidase O. These led to a putative diagnosis of chronic CML. Hydroxyurea and imatinib were initially administered to reduce leukocytosis. On the third day of hospitalization (HD), fluorecence in situ hybridization (FISH) for was negative; thus, imatinib was discontinued.

BM cytogenetics was 46, XY, and the multiplex real-time polymerase chain reactions for 28 chromosome translocations, including , were negative. Results of FISH for , , and rearrangement were negative. Customized targeted DNA sequencing (NGeneBio, Seoul, South Korea) of 119 genes, including , or , , , , , and revealed mutations in gene, c.1853C>T (p.T618I) (variant allele frequencies, VAF 40.89%) and c.1919C>A (p.T640N) (VAF 10.7%). Also, fusion was not found. These results led to the diagnosis of aCML with mutation.

After the initial aspiration of ICH, conservative measures using mannitol, dexamethasone, levetiracetam, and platelet transfusions were continued. On HD3, however, abrupt dilatation (8 mm) and loss of light reflex in the left pupil were noted, and a repeat brain CT revealed increased amount of ICH. Repeat aspiration of the hematoma resulted in decrease of ICH. The impaired patient’s memory, orientation, and motor function of the right side gradually recovered over 2 weeks. The spleen was no longer palpable and leukocytosis and blast counts in the BM were normalized 4 weeks after the patient was started on hydroxyurea (Fig. 2). 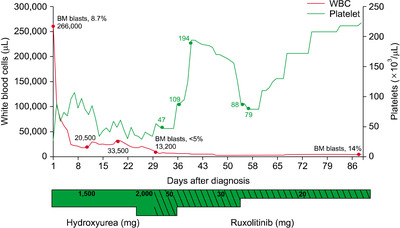 Figure 2. Laboratory findings, including white blood cell counts, platelets in the peripheral blood, and blast counts in the bone marrow over 90 days from diagnosis to hemato-poietic stem cell transplantation.

On HD 28, upon the identification of mutation, ruxolitinib was initiated at 35 mg/m2 per day due to thrombocytopenia, and hydroxyurea was discontinued. Ruxolitinib was used off label. As a result of decreased WBC and platelet counts, the ruxolitinib dosage was reduced to 13 mg/m2 per day and maintained for 10 weeks as a bridge to HSCT, according to a recent report [2]. However, at 2 months of ruxolitinib treatment, which was 3 months after the diagnosis, a follow-up BM aspiration revealed increased blasts of 14% (Fig. 1D).

The patient received planned allogeneic peripheral blood stem cell transplantation from an 8/8 allele-matched unrelated donor. The conditioning regimen consisted of fludarabine (40 mg/m2 for 5 days) and busulfan (3.2 mg/kg for 3 days). Graft versus host disease (GvHD) prophylaxis consisted of rabbit antithymocyte globulin (1.25 mg/kg for 3 days), tacrolimus, and low doses of methotrexate. The time to neutrophil and platelet engraftment were 11th day, 12th day after transplant, respectively. Post-transplant 6 months, at one month after tacrolimus-off, he developed stage 3 gut GvHD which was treated with steroid and ruxolitinib.

Currently, his motor function has fully recovered, although magnetic resonance imaging of his brain showed encephalomalacic changes with hemosiderin deposit in the left frontal lobe and corpus callosum, sequelae of previous ICH (Fig. 1E). He remains in hematologic remission with complete donor chimerism at 8 months after transplant with manageable gut GvHD.

Making the diagnosis of aCML in children is quite challenging, as they are extremely rare, and they may share clinical, morphologic and molecular similarities with other MDS/MPDs. Mutation in the gene was found in 50-80% of cases of CNL, but <10% in aCML [1,6]. However, in this case, the morphology of the BM and PB revealed increased neutrophil precursors of 23% (>10% of leukocytes), some segmented or banded neutrophils in PB, and the presence of dysgranulopoiesis. These findings were compatible with those of aCML.

The natural history of aCML is characterized by an increasing leukemic cell burden, organomegaly, and a high rate of transformation to acute myeloid leukemia in 37-40% of aCML cases [1,2,9,10]. There is no current standard of care, but the only curative treatment option is allogeneic HSCT [1,2]. Traditionally, treatments used in MDS/MPN cases (such as hypomethylating agents, hydroxyurea, pegylated-interferon-alpha, and erythropoietic stimulating agents) have been utilized to control leukocytosis and symptomatic splenomegaly [2]. Recently, owing to the discovery of mutations in aCML, promising targeted therapies were investigated, including the JAK inhibitor ruxolitinib, SRC kinase inhibitor dasatinib, and MEK inhibitor trametinib [1,11].

CSF3R mutation has two types [1,6]. First, membrane proximal mutations, such as and activate the JAK/STAT pathway and are inhibited by ruxolitinib. Second, truncation mutation activates SRC family-TNK2 kinase signaling and is sensitive to SRC kinase inhibitors, such as dasatinib. A few cases have reported encouraging results after treatment with ruxolitinib in aCML with mutation [7,12,8]. Among these reports, there was only one pediatric patient who showed a robust response to ruxolitinib and then successfully underwent a HSCT [7]. Recently, in a phase II study of ruxolitinib with 44 adult patients (21 CNL and 23 aCML), irrespective of mutation status, 35% of the patients had an overall response (complete and partial response), and among them, 50% had oncogenic mutations. In 16 CNL and 6 aCML cases with mutation, 13 and 1 patients had responses, respectively [5]. A Children’s Oncology Group Phase I study for relapsed or refractory solid tumors, MPN, and leukemia recommended the ruxolitinib dose of 50 mg/m2/dose twice a day [13].

In this case, after the identification of and mutations, ruxolitinib was initiated at 35 mg/m2 per day due to low blood counts. Unfortunately, after treatment of ruxolitinib for 2 months, his BM blast counts were increased, even though he maintained clinical and hematologic responses.

To date, the largest study of allogeneic HSCT for aCML has been reported from the European Society for Blood and Marrow Transplantation registry [14]. In 42 adult patients with aCML between 1997 and 2006, the 5-years relapse-free survival following HSCT was 36%, and non-relapse mortality was 24%, while relapse occurred in 40%. Their median time from diagnosis to transplant was 7 months. There are no current recommendations on the optimal timing of HSCT for aCML. However, the finding of increasing blast counts despite ruxolitinib treatment in this case might justify early intervention with allogeneic HSCT if a donor is available.

In conclusion, ruxolitinib for aCML with mutation might not always induce a significant response but could be used as bridge to HSCT. The clinician should make an effort in searching for all eligible candidates for HSCT from the time of diagnosis of aCML. Prospective, collaborative studies incorporating new target agents are needed to provide the management guidelines of aCML, especially in pediatric cases.