Abstract
Ewing sarcoma is a solid tumor involving the bone and/or surrounding soft tissue, which requires multidisciplinary treatment, primarily through a combination of surgery and chemotherapy and, in some cases, radiation therapy. We present the case of a patient who was diagnosed with stage I Ewing sarcoma without metastasis who had a lesion in one of the left 3rd metacarpal bones. The patient’s family members were active Jehovah’s Witnesses; therefore, the patient’s guardian refused blood transfusions for religious reasons. The medical staff explained the fatal side effects of pancytopenia after chemotherapy, and when life-threatening anemia, thrombocytopenia, and neutropenia occurred, the patient’s guardian agreed that the intensity of chemotherapy needed to be either reduced or stopped. The patient’s treatment regimen was as follows: VDC (vincristine, doxorubicin, cyclophosphamide) and IE (ifosfamide, etoposide) were alternately administered as neoadjuvant chemotherapy, followed by complete tumor excision and more chemotherapy. As red blood cell transfusion was impossible, only erythropoietin (EPO; EpokineⓇ, HK inno.N, Seoul, Korea) and granulocyte colony-stimulating factor (G-CSF; GrasinⓇ, Kyowa Kirin, Seoul, Korea) were administered as adjuvant therapy. During the course of treatment, hemoglobin levels decreased to as low as 6.7 g/dL; however, treatment without transfusion was possible with the administration of EPO and G-CSF, with minimal changes in the chemotherapy schedule. With 6 months follow-up post-treatment, the patient is still alive with no relapses observed on positron emission tomography-CT and bone scans.
Keywords: Ewing sarcoma, Blood transfusion, Jehovah’s Witness, Child

In most cases, bleeding that occurs during surgery and due to bone marrow suppression during chemotherapy and radiation therapy requires red blood cell and platelet transfusions. Womer et al. reported that the survival rate for Ewing sarcoma was improved when the 3 weeks vincristine, doxorubicin, cyclophosphamide (VDC) and ifosfamide, etoposide (IE) chemotherapy intervals was shortened to 2 weeks [1]. When the treatment interval is shortened, the bone marrow recovery period is also shortened, which can cause bone marrow suppression after chemotherapy; therefore, red blood cell and platelet transfusions are necessary. However, if chemotherapy intensity is lowered to avoid the need for blood transfusions, the probability of tumor recurrence is relatively high.

A bloodless pediatric chemotherapy regimen has been reported in two cases in Korea, one for acute lymphocytic leukemia and one for acute myeloid leukemia [2,3]; however, there are no reports on solid tumors, and Ewing sarcoma, in particular. We treated a child diagnosed with Ewing sarcoma with erythropoietin (EPO) and granulocyte colony-stimulating factor (G-CSF) without blood transfusion, as the parents refused blood transfusion for religious reasons; therefore, she did not receive sufficient red blood cell and platelet transfusions after chemo-therapy. Herein, we describe the experience of such a patient considered to be cured as there was no tumor recurrence for at least 6 months after completion of the treatment regimen.

A 28-month-old girl presented at our orthopedic surgery clinic with pain and swelling in the metacarpal bone of the left hand, which started 1 month before the hospital visit. During hospitalization, she underwent magnetic resonance imaging (MRI), biopsy, and exploratory surgery of the area of concern, considered a primary malignant bone tumor, after which she was diagnosed with Ewing sarcoma.

Blood tests showed the following results: hemoglobin (Hb) 12.1 g/dL, white blood cells (WBC) 7,760/mL, absolute neutrophil count (ANC) 2,615/mL, platelet (Plt) 355,000/mL, and reticulocyte count 1.1%. CD99 and FLI-1 were confirmed via biopsy. Attempt was made to proceed with next generation sequencing for Ewing sarcoma ribonucleic acid binding protein 1 (EWSR1) rearrangement, however the examination could not be conducted due to tissue incompatibility. Chest computed tomography (CT), brain MRI, bone marrow biopsy, positron emission tomography-CT (PET-CT), and bone scan were performed to assess for metastasis: the result did not show any specific findings except for a primary bone tumor in the left hand; therefore, she was diagnosed with stage Ⅰ localized Ewing sarcoma.

She had no past medical history, although her guardian refused red blood cell and platelet transfusions due to religious reasons, specifically that they were active Jehovah’s Witnesses. Surgery and chemotherapy were required for the diagnosis, and the need for blood transfusion due to bleeding and myelosuppression was explained to the guardian.

After obtaining consent for possible complications and for consequences of refusing blood transfusion, EPO and G-CSF were administered instead and chemotherapy was initiated. The modified POG#9354/CCG#7942 protocol was used for preoperative chemotherapy. Due to recent trends, it was decided to narrow the VDC/IE intervals from 3 to 2 weeks to increase survival rates.

At the start of chemotherapy, the patient’s laboratory data were as follows: Hb 10.0 g/dL, WBC 6,640/mL, ANC 2,735/mL, Plts 318,000/mL, and reticulocyte count 1.8%. Three days after the first cycle, her Hb level started to decrease, and reticulocyte count was 0.4%; therefore, EPO administration was started in anticipation of worsening anemia. During chemotherapy, EPO was administered intravenously three times a week, trying to keep the interval of 48 hours, and the dose was calculated as 300 IU/kg, for a total of 4,000 IU of EPO. After the end of the third cycle, Hb level fell to 6.9 g/dL, Plts to 24,000/mL, and ANC to 16/mL; however, no blood products, only EPO and G-CSF were administered until the fifth chemotherapy cycle (three cycles of VDC and two of IE).

After the fifth cycle, MRI confirmed that the transverse diameter of the tumor had decreased from 1.5 to 1.3 cm, and internal necrosis and surrounding vascular invasion were reduced compared with those during initial MRI (Fig. 1). Thirteen weeks after the start of chemotherapy, an orthopedic surgeon performed total excision with metacarpal bone graft. Pathology detected no viable cancer cells, and free resection margins were confirmed; therefore, chemotherapy was re-initiated without adjuvant radiation. She maintained the 2-3 week interval for the chemotherapy schedule with the exception of the fifth and sixth cycles, which were interrupted due to surgery. Although at their lowest, Hb was 6.7 g/dL, Plts 34,000/mL, and ANC 10/mL; EPO and G-CSF were administered without blood transfusion in preparation for anemia and neutropenia. 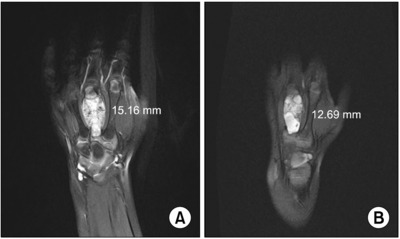 The patient successfully completed chemotherapy without complications other than neutropenic fever. As of a follow-up at 6 months post-treatment, she was still alive with no tumor recurrence based on PET-CT and bone scans (Fig. 2). 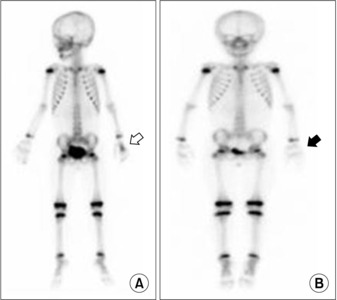 In cancer therapy, there are numerous concerns about treatment effectiveness and side effects when a patient refuses blood transfusion for religious reasons. In an intensive multidisciplinary approach, such as treatment regimen for Ewing sarcoma, if life-threatening anemia, thrombocytopenia, and/or neutropenia occur despite the use of adjuvant therapy for blood transfusion, treatment begins with consent that the intensity of chemotherapy has to be reduced or stopped did.

Reports have described cases in which patients with pediatric cancer practicing Jehovah’s Witnesses were successfully treated using EPO and G-CSF as adjuvant therapy instead of blood transfusions; these case reports, however, were only found in foreign literature [5]. In domestic literature regarding children practicing Jehovah’s Witnesses, only acute lymphocytic and myeloid leukemia were documented as being successfully treated with these alternate adjuvant therapies [2,3]. With the exception of our case, there are no published reports of patients being treated for solid tumors, such as Ewing sarcoma, with bloodless adjuvant therapies.

G-CSF, one type of adjuvant therapy, is primarily used as supportive therapy for patients with solid tumors as it may stimulate the proliferation of leukemia blasts or immature white blood cells and potentially reduce the duration of neutropenia, the course of treatment-related infections, and mortality [6]. Kronberger et al. reported that the need for blood transfusions decreased, while Hb levels increased in patients with pediatric cancer receiving EPO [7]. Side effects of these adjuvant therapies, however, may include allergic reactions, seizures, thrombosis, and bone pain, although these side effects were not observed in our case [8,9].

Carson et al. reported that the risk of death is very high when Hb is <6 g/dL, which is typically due to anemia or bleeding that occurs during treatment course, and that mortality is lowered when Hb is maintained between 7.1 and 8.0 g/dL [10]. Low Hb level can have a significant negative effect on treatment outcomes [11]. Therefore, in the present case, medical staff monitored the child's Hb level, and when it decreased to 7-8 g/dL, EPO was administered to maintain her Hb level at >7 g/dL as much as possible throughout her treatment course.

Additionally, in the event of pancytopenia, cancer treatment may become less effective if the chemotherapy is not administered at the expected interval to avoid blood transfusion. The patient in the present case was able to maintain a chemotherapy treatment interval of 2-3 weeks due to G-CSF and EPO administration at appropriate times in conjunction with the chemotherapy schedule, except between the fifth and sixth chemotherapy cycles, which were administered at a 4 week interval due to tumor excision surgery. Bone marrow recovery progressed as the interval between the fifth and sixth cycles increased to 4 weeks. After the 12th cycle, doxorubicin was omitted due to an excessive cumulative dose. Hb levels increased, and the need for EPO decreased in the two periods specified above. Except for the two periods specified above, the patient’s Hb level decreased and the need for EPO increased when chemotherapy was maintained at an interval of 2-3 weeks (Fig. 3). Thrombopoietin agents were not used in this patient because the platelet count never dropped below 20,000/mL. 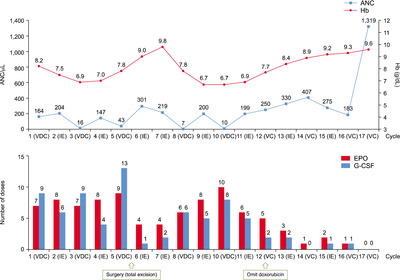 As in the case presented herein, even in patients with religious beliefs that prohibit blood transfusions, active chemotherapy can be successfully administered, conjunction with adjuvant therapies such as EPO and G-CSF.