Abstract
Extramedullary relapse in acute lymphoblastic leukemia (ALL) usually occurs in the central nervous system and testes those are known as sanctuary sites. Only a few cases of isolated breast relapse after allogeneic hematopoietic stem cell transplantation (HSCT) have been reported in pediatric ALL, with little known about the optimal treatment and prognosis of such cases. Herein, we report a pediatric case of isolated breast relapse with early T-cell precursor ALL after HSCT. We also describe a literature review of six pediatric cases, including our case.
Keywords: Extramedullary relapse, Isolated breast relapse, Pediatric acute lymphoblastic leukemia, Hematopoietic stem cell transplantation

Extramedullary relapse (EMR) in acute lymphoblastic leukemia (ALL) usually occurs in sanctuary sites, such as the central nervous system and testes. Other organs, such as the ovaries, kidneys, and breasts, can also be involved. However, isolated extramedullary relapse (iEMR) in those sites after hematopoietic stem cell transplantation (HSCT) is extremely rare [1,2]. Additionally, only a few cases of isolated breast relapse after HSCT, wherein the marrow maintained morphologic remission and full donor chimerism, have been reported in children [3-7]. Little is known about the optimal treatment and prognosis of such cases. Herein, we report the case of a 14-year-old female who developed isolated breast relapse of ALL after allogeneic HSCT. We also describe the characteristics and outcomes from a literature review of six pediatric cases, including our case.

A 12-year-old girl presented with low grade fever and easy bruising. On physical examination, the liver and spleen were palpable about 2 cm below the costal margin. Her complete blood cell counts were as follows: white blood cells, 124,200/mL; hemoglobin, 9.5 g/dL; and platelets, 43,000/mL. Bone marrow (BM) aspirates revealed blasts counts of 88.9%, and leukemic cells in the marrow expressed CD34, CD7, CD33, CD117, and cytoplasmic CD3 by flow cytometry. She was diagnosed with early T-cell precursor ALL (ETP-ALL), based on the World Health Organization classification. Complex karyotype (46,XX, add(1)(p36.1),add(10)(p13),del(11)(q?),del(12)(q?),del(13)(q?) [16]/46,XX[4]) was confirmed in cytogenetic analysis, and fusion was found on deep RNA sequen-cing (Customized targeted sequencing, NGeneBio, Seoul, Korea). The cerebrospinal fluid examination was unre-markable. Induction chemotherapy with a four-drug regi-men was administered, but it failed to achieve remission (M3 marrow). However, she achieved complete remission (CR) after treatment with a salvage chemotherapy of FLAG-IDA (fludarabine, cytarabine, idarubicin and G-CSF). After two more rounds of consolidation chemotherapy (ifosfamide and etoposide in the first consolidation, high dose cytarabine and methotrexate in the second), a peripheral blood HSCT from an 8/8 allele-matched sister was performed. The conditioning regimen consisted of etoposide (30 mg/kg), cyclophosphamide (120 mg/kg), and total body irradiation (12 Gy). Cyclosporine and short-course methotrexate were used for prophylaxis of graft-versus-host disease (GvHD), and cyclosporine was stopped at 6 months post-transplantation. Her post-transplant course was uneventful, with the exception of mild hepatic sinusoidal obstruction syndrome.

One year after transplantation, she felt a painless and firm mass in her right breast. Breast ultrasonography (US) (Fig. 1A) and magnetic resonance imaging (MRI) (Fig. 1B) demonstrated a 4.2×2.3×2.6 cm heterogeneous mass with focal irregular margins at the 9 o’clock position of the right breast, classified as category 4 by the Breast Imaging- Reporting and Data System (BI-RADS). A US-guided core needle biopsy showed diffuse infiltration of lymphoblastic cells, positive for CD34, CD3, CD7, Ki-67, and terminal deoxynucleotidyl transferase (Fig. 2). Positron emission tomography-computed tomography revealed a strong fluorine-18 fluorodeoxyglucose uptake only in the right breast mass (Figs. 1C and 1D). Laboratory data showed white blood cells of 4,600/mL, hemoglobin of 13.2 g/dL, platelets of 129,000/mL, and normal serum chemistry. No evidence of leukemia in the BM and cerebrospinal fluid was noted, and chimerism status using the short tandem repeat analysis showed complete donor chimerism, suggesting isolated EMR of ALL. Breast MRI after two cycles of FLAG-based chemotherapy showed radiologic CR (Fig. 1E). She also received additional local radiation therapy of a total dose of 20 Gy in 10 fractions and is currently on maintenance chemotherapy. Both BM exams and breast US have been conducted every 3 months post-radiotherapy. To date, she has been in a second CR for 8 months. 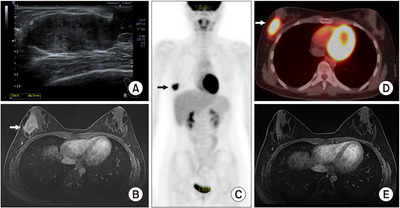 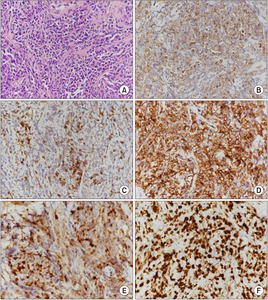 Relapse remains the major cause of treatment failure in pediatric patients receiving HSCT for high-risk, acute leukemia. The cumulative incidence of iEMR is shown to be 5.5% in children [1], similar to that of adult patients (3.1-5.8%) [2,8]. In a multicenter study for children with ALL, iEMR accounted for 19.7% of all relapses after the first allogeneic HSCT [9]. EMR in the breast is rare, with only six pediatric ALL cases of isolated breast relapse after HSCT published to date, including our case (Table 1).

Cunningham reported results of a large study of 153 patients with acute leukemia with breast involvement published between 1969 and 2005 [10]. Only 46 cases of ALL had breast involvement. Fifteen patients experienced breast involvement at the time of the first relapse after HSCT. Among them, seven were aged <19 years, but only three had iEMR in the breast [3-5]. Additionally, all relapses occurred within 24 months of transplant and often preceded systemic relapse [10].

Breast lesions in relapse can appear as palpable masses on one or both sides and with or without tenderness [11]. In this literature review, all patients except one experienced unilateral involvement. Half of the patients underwent HSCT at their first complete remission (CR1). The WBC count at initial diagnoses was noted in three patients, one of whom was our patient with hyper-leuko-cytosis. Complex cytogenetic abnormalities were report-ed in three patients [one of B-cell ALL (B-ALL) and two of T-cell (T-ALL)], and no prior extramedullary (EM) disease was note in all of five available patients. All six patients had relapsed, even though they had received total body irradiation as a part of the first HSCT condi-tioning.

Of the six reported cases, two had T-ALL. One of these cases was a breast relapse after cord blood transplant in CR2 [5], and the other was our case, with ETP-ALL. ETP-ALL accounts for approximately 10-13% of T-ALL in children and 1-2% of all childhood ALL [12]. Drawing conclusions from the seemingly higher proportion of T-ALL (2/6, 33%) or ETP-ALL (1/6, 16.7%) for isolated breast relapse may not be possible, as it is extremely rare.

The risk factors for post-transplant EMR, including in the breast, are not well defined [1,2,13]. In one retrospective study, hyperleukocytosis at diagnosis, high-risk cytogenetics, and peripheral blood stem cell grafts were significant risk factors for EMR after HSCT in ALL [2]. Moreover, another study aimed at predicting iEMR after HSCT described CR2+ or active disease at transplan-tation and prior EM disease as independent risk factors in pediatric patients [1]. Our patient had a high leukocyte count of 124,200/mL, a complex karyotype, and no previous EM disease. She also received total body irradiation as conditioning and received peripheral blood as stem cell source.

Acute or chronic GvHD reduces the risk of bone marrow relapse (BMR) through the graft-versus-leukemia (GVL) effect; however, it appears less effective against EMR [1,8,14]. Lee et al. reported similar EMR-free survival between patients with and without acute GvHD, whereas BMR-free survival was significantly higher in those with acute GvHD [14]. In the present literature review, three pediatric patients had experienced acute GvHD before breast relapse, indicating a nonprotective effect of GvHD.

The mechanism of isolated relapse in the breast remains unclear and cannot solely be explained by the blood-tissue barrier, which is an obstacle in providing systemic therapy to sanctuary sites. Recent biological concepts about EMR in ALL have focused on the role of the microenvironment and specific chemokine receptors [15]. However, optimal therapeutic approaches for isolated breast EMR, particularly in patients relapsing after HSCT, have not been determined, due to their rarity. Various treatments, including chemotherapy, radiotherapy, and second HSCT, have been attempted [3-7,10]. Local radiotherapy was applied in four of the six pediatric cases in this literature review. Savasan et al. reported one patient receiving chemotherapy only with the first isolated breast EMR and subsequently experiencing a second iEMR in the same breast [4]. Radiotherapy may be important for local control, as it has shown to be in other EMR. A durable response was achieved with a second transplantation in one patient [7]. However, the effect of a second HSCT on survival outcome is dubious, due to a smaller GVL effect and significant toxicities. In addition, individually adapted systemic therapies should be com-bined, as the presence of iEMR may suggest occult leukemia, regardless of remission status in the marrow [8]. Our patient received re-induction chemotherapy, sub-sequent local radiotherapy, and maintenance chemotherapy, which may have contributed to continuous re-mission.

Although the prognosis of iEMR after HSCT is superior to that of BM only relapse or EMR with BM involvement, it remains poor [1,8,9]. Cunningham reported that 10 out of 15 cases of post-transplant relapse with breast involvement experienced further relapses [10]. The outcomes of six pediatric patients with isolated breast relapse after HSCT were presented in this review. Three of the patients experienced additional relapse: one with BMR and two with a second iEMR [3-5]. At the time of the reports, three patients were alive and in CR: one receiving chemotherapy and radiotherapy after the second iEMR of the breast; one receiving second HSCT; and our patient, on maintenance therapy [4,7].

In conclusion, the breast is a potential site for relapse of ALL, even after HSCT. Clinicians should be aware of the possibility of local relapse in patients with breast lumps, regardless of remission status in the BM. Appropriate treatment regimens and intensities are not established due to the rare and heterogeneous clinical course, particularly in children. Thus, more long-term follow-up on cases is needed to devise treatment strategies and predict prognoses.